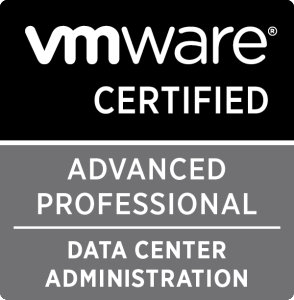 I recently passed the VMware VCAP-DCA exam for vSphere 5.5, and as others have done, wanted to share a few of my thoughts on the exam. The absolute biggest challenge is time. At only 180 minutes long and 23 questions, you would think there would be ample time to get through every question with room to spare. Not the case for me. The first time I looked up, 60 minutes was gone, then before I knew it there was only 20 minutes left. The challenge is knowing how long to spend on any given question, since each one differs so much one from the next.

As far as studying goes, the best advice I can give you is to just practice vSphere troubleshooting and setup tasks as often as possible in a real environment or lab if you don’t have regular access to a production vSphere environment. I did take the VMware vSphere: Troubleshooting Workshop [V5.5] class back in December. It was helpful, but mostly just as a primer to the sort of questions you might be asked on the exam. The best thing to do, which I started doing back in January, was performing every task I could do using esxcli, PowerCLI and the vSphere Web Client. Using my Intel NUC lab, I went through setting up the entire environment from scratch several times — creating iSCSI mounts entirely using esxcli, creating distributed virtual switches, DRS/HA clusters, etc.

There are several study guides out on the Internet as well that are good for brushing up on the blueprint items you may be unfamiliar with. Download the ones you think will help you and go through them as much as possible. Overall, I would just say that if you are already a vSphere Administrator in your current role, the test itself will not prove too large of a hurdle. Just breathe deep and work through each question.

The questions themselves covered a broad depth of topics, but none of the questions were as arcane or obscure as a few VCP questions I got taking that test (i.e. storage encryption switch for Fiber Channel storage arrays and its effect on VMFS datastores). There were some questions you had to use esxcli to successfully complete, some that could be done either through the web client or the old thick client and a couple that you had to use the web client to answer.

I was not able to finish all of the questions in the time allowed and when I left the exam facility, I did not think I had passed. I was pleasantly surprised when the results arrived and I scored in the mid-300s — enough to pass. The VCAP-DCD exam is up in the next month in preparation for the VCDX defenses in the beginning of 2016.

If you decide to take the exam, good luck. It was a great feeling with the email saying I had passed the test!