The year was one of the very best in recent memory across many aspects of my life — it also saw some of the biggest changes! When 2015 began I set out to accomplish several goals both personally and professionally, nearly all of which were realized in a much shorter time period than expected. The biggest goal, and change, that came about this year for my professional career was to become a full-time cloud architect. Initially, I did not think that goal would be realized until late Q3 or early Q4, however much to my surprise an unreal opportunity came in Q2 and I suddenly found myself (and family) moving to Northern California to join VMware as an architect on their private cloud team. It happened so fast that much of the remaining seven months of the year have been a whirlwind and left me with a feeling of whiplash when I look back!

The other two professional goals I set for myself included growing the Virtual Elephant audience and gaining both VCAP-DCV certifications. I have been very pleased with the success I have achieved in both areas — neither of which could have been achieved without a great support system of friends and family. The Virtual Elephant blog began in Q3 of 2014 with very modest goals of being a place I could talk about Hadoop and generic virtualization topics without re-writing much of the great work that is already on the internet. As 2015 began, I felt as though I had found my niche in the blogosphere, focusing on Hadoop and Cloud Native Applications. The year has been a great one for both sets of technologies, and I have immensely enjoyed writing about these topics. I get excited whenever a new feature preview comes about or an idea pops into my head for something else to try. Not every idea has made it onto the blog, but those that have I am extremely pleased with.

The most important accomplishment in 2015 was celebrating my 15th wedding anniversary with my wife! It was not a typical “goal” you set at the start of the year, but a major accomplishment nonetheless. The last 15 years of marriage have been amazing and we have a beautiful family where we have been blessed with six truly amazing children. Most of the credit goes to her for these accomplishments. Without her support, faith, care and love I would not be the man I am today nor have seen the success the year brought!

The audience was all over the world, with the following graphic coming from the sites annual WordPress report. 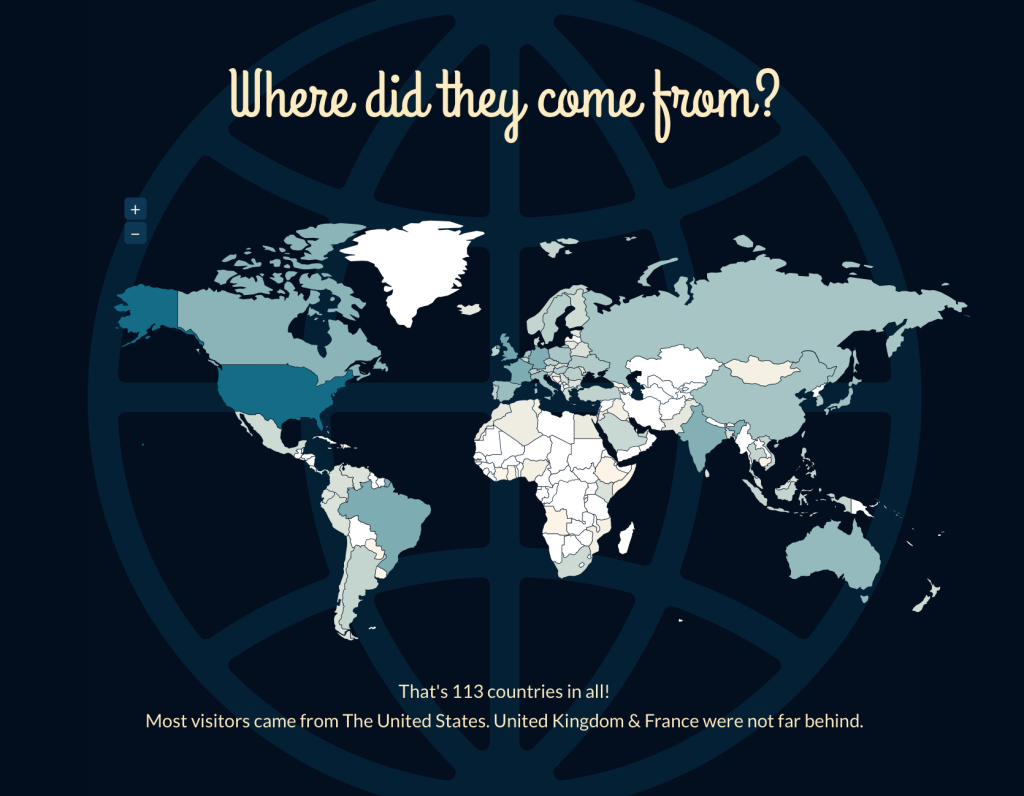 The site saw ~50 posts published throughout the course of the year and the top posts on the site were:

Not having statistics from 2014 makes judging these numbers impossible, but I am confident the traffic rate from the site more than doubled this year. The goal for 2016 is to see those numbers double again, but the only way that happens is if I continue to generate good, interesting and useful content for the community!

I truly believe the most important thing to do with a blog, especially if you are looking to differentiate your voice from the masses, is to generate new, creative and unique content. I hope to continue to do so in the future.

I do not yet know what 2016 holds for me, but I am excited by the things I am working on and look forward to seeing them through to completion. The biggest professional goal I have for 2016 is to gain my VCDX certification. The past year has helped me grow significantly and I have been truly blessed to be surrounded by great individuals at work each day who challenge me and help me to become a better architect. Hopefully the February VCDX defenses will be my opportunity to achieve this next milestone in my career.

I also hope to continue writing, both for the blog and on the book I have been working on throughout this year. The idea of being a published author is something I had never fathomed before a couple years ago and what a learning experience it has been! I look forward to sharing more details on the book project with you in the future.

Finally, I hope to return to the VMworld stage this year to talk and share my experiences with you running very large-scale infrastructure, best practices and interesting information surrounding the Cloud Native Apps space.

I hope you all have a wonderful New Year and look forward to talking to each of you in 2016!