In an effort to get caught-up with the Cloud Native space, I am embarking on an effort to build a completely dynamic Kubernetes environment entirely through code. To accomplish this, I am using (and learning) several technologies, including:

There are a lot of great articles on the Internet around Kubernetes, CoreOS and other Cloud Native technologies. If you are unfamiliar with Kubernetes, I highly encourage you to read the articles written by Hany Michaels (Kubernetes Introduction for VMware Users and Kubernetes in the Enterprise – The Design Guide). These are especially useful if you already have a background in VMware technologies and are just getting started in the Cloud Native space. Mr. Michaels does an excellent job comparing concepts you are already familiar with and aligning them with Kubernetes components.

Moving on, the vision I have for this Infrastructure-as-Code project is to build a Kubernetes cluster leveraging my vSphere lab with the SDDC stack (vSphere, vCenter, vSAN and NSX). I want to codify it in a way that an environment can be stood up or torn down in a matter of minutes without having to interact with any user-interface. I am also hopeful the lessons learned whilst working on this project will be applicable to other cloud native technologies, including Mesos and Cloud Foundry environments.

Logically, the project will create the following within my vSphere lab environment: 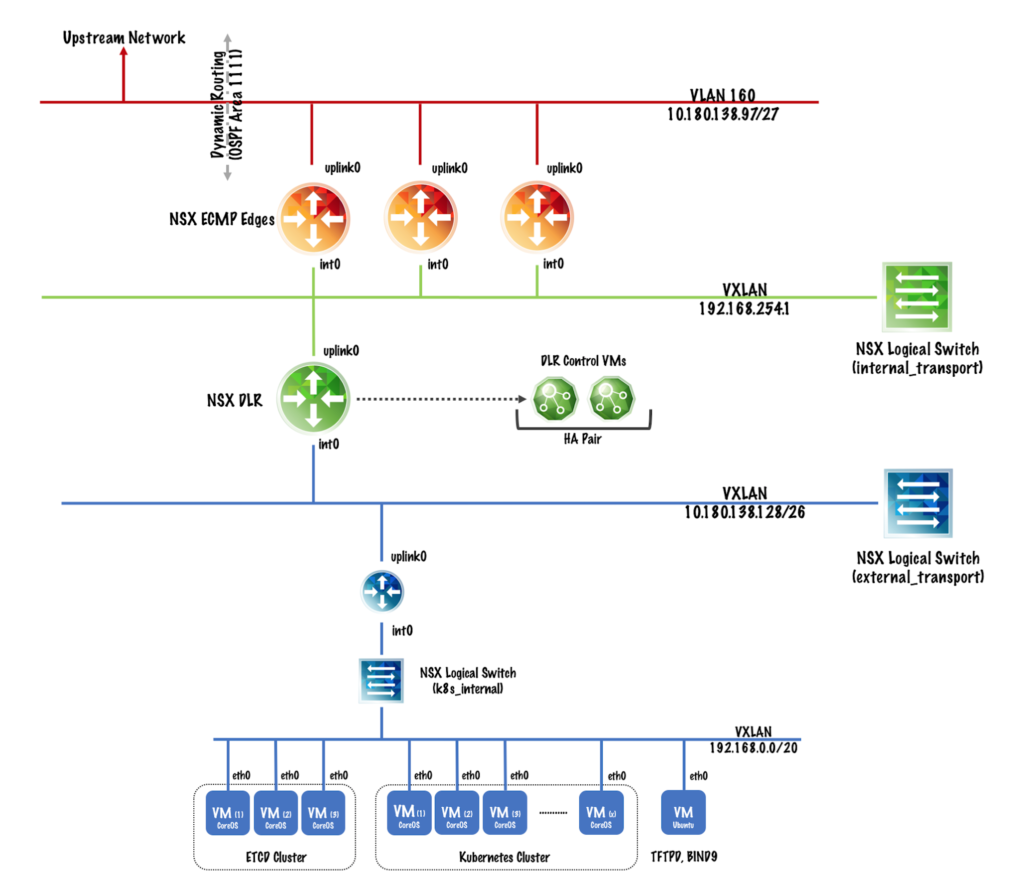 I will cover the NSX components in a future post, but essentially each Kubernetes environment will be attached to a HA pair of NSX Edges. The ECMP Edges and Distributed Logical Router are already in place, as they are providing upstream network connectivity for my vSphere lab. The project will focus on the internal network (VXLAN-backed), attached to the NSX HA Edge devices, which will provide the inter-node network connectivity. The NSX Edge is configured to provide firewall, routing and DHCP services to all components inside its network space.

The plan for the project and the blog series is to document every facet of development and execution of the components, with the end goal being the ability of anyone reading the series to understand how all the pieces interrelate with one another. The series will kickoff with the following posts:

If time allows, I may also embark on migrating from NSX-V to NSX-T for providing some of the tenant software-defined networking.

I hope you enjoy the series!